If you are not on the Franzosenbusch Heritage web-team, you should go to our main site to find topics.  This page is a temporary holding and review area.

You must be connected to the web for this to function.

For the founding fathers you should check against the bibliography found at:

Bartling -- The Bartlings are mentioned in several of the other entries here in addition to the one for the ILC and school at:

Obviously this prior link and its derivatives include reference to many (of not all) of the other names in this list. 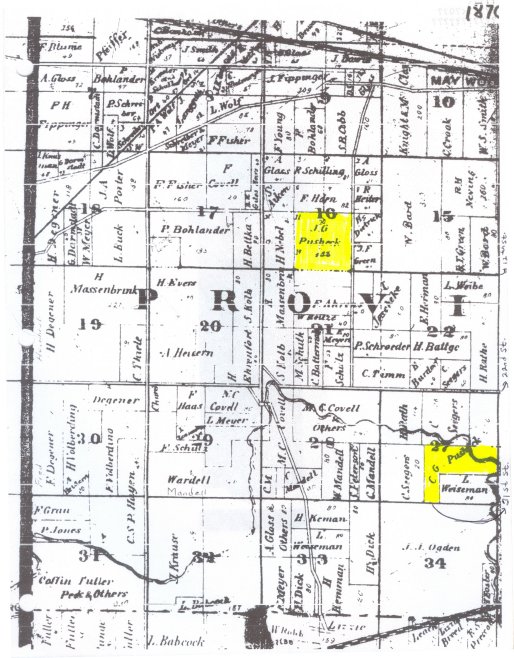 *I think that south border is Roosevelt Road, not 22nd Street.  (JIM)

The small one that is kind of "L" shaped  I believe is the Christian Gottlieb Puscheck farm which would have been on the north side of 31st street; maybe about 10th avenue on the east; and around 26th street along the south/north side.  Along the west side it might have started along 17th avenue which would have put it along the immediate south edge of the Addison Creek that flows behind the Cook County Forest Preserve building off of 17th avenue.  The C.C. property was originally one of the Seegers farms at the corner of 22nd and 17th street.

The farm map that I copied was from 1870 and it shows the different sections.  If you get a present day section map....it might show you exactly the boundaries of the two Puscheck farms.

The Puscheck store in Brookfield was located at 3729-31 Grand Blvd.  The John Puscheck store was one of three along that street in 1897.  Of the three, Puscheck's was the largest.  I believe that Weber Travel Agency might be located in the store at the present time.  The Weber Travel Agency is associated with my Czech-Slovak Genealogy Club and handles their travels.  I have three photos which were published courtesy of Chris Stach who we all know as the Brookfield historian.  I bet we could get permission from him for publication on the web!

By the way....I talked with Howard Mandel, a descendant of the dairy farm at 31st and Wolf Road and yes, he has a lot of pictures.  And, yes, he is willing to share with me.  Of course, that family is related to the Degeners, Hoehnes and Puschecks.  I am going to get right on it today and see what I can get.  That would take care of four of the founding fathers....Heinrich and Frederick Degener, Christian Puscheck and Christian Mandel.  It is getting there .... I would say!

P.S.  I have the ships that the Degeners and Puschecks immigrated on and I bet I could find the Mandels if I looked hard enough! 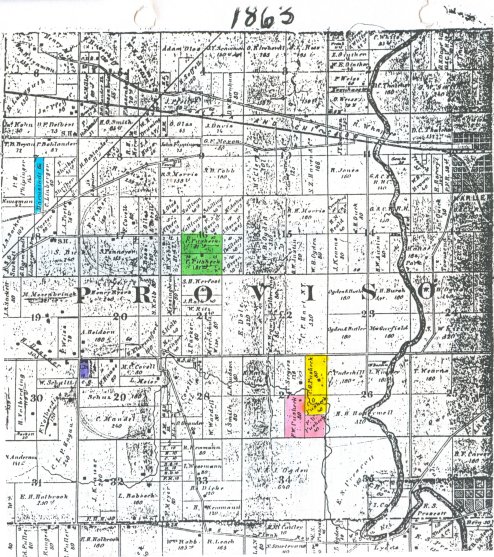 I have colored five different colors to help you get your bearings!

1.  Purple is the 40 acres of Immanuel Lutheran Church located at 22nd and Wolf Road and right on the east side is Degener's 40 acres.

2. Blue is approximately 60 acres of the Darmstadt farm located between Butterfield Road and St. Charles Road.  Just to the east is the Shriber farm which is where the Hillside Historical Society house is located.  The Old Settlers Cemetery which is original Bohlander property is just north of the Darmstadt farm.

5. Pink is Frederich William Puscheck - runs from north side of 31st Street and south of the Addison Creek between 17th Avenue and probably 10th Avenue - but don't hold me to that because it is a rough guess.

Christian Gottlieb died in 1861 and is buried in the Proviso Cemetery and Frederick William was born in 1832 and I don't have a death date for him at this time.

An interesting item from the Westchester News Jan 6 1966.

This picture is the east side of the Battermann monument.  This monument sits in the south half of the Immanuel Lutheran Cemetery, Lot 2-28. 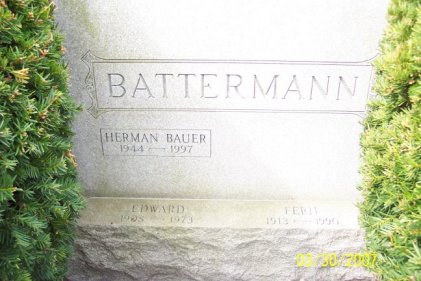 The west side of the Battermann monument in Immanuel Lutheran Cemetery. 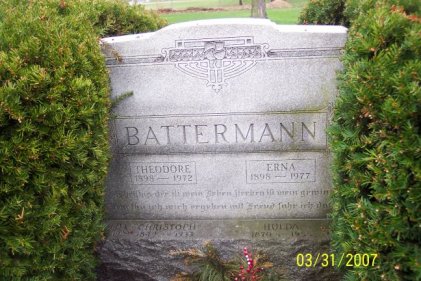 Elmer and Clara Schultz headstone below is related to the prior one because Clara B. Schultz was a Battermann before her marriage to Elmer.  They are buried on Lot 2-29. 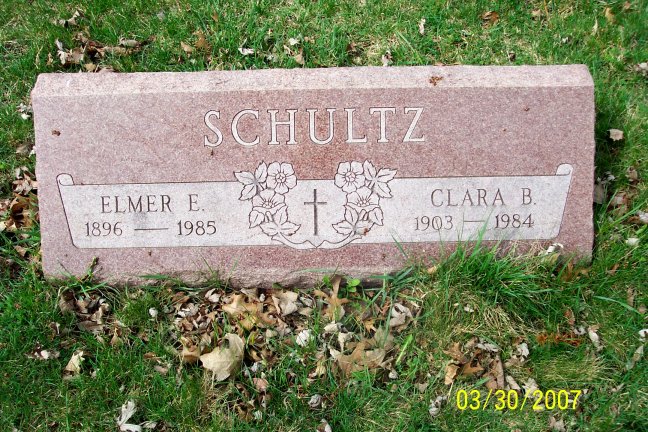 The next monument is in Oakridge Cemetery. 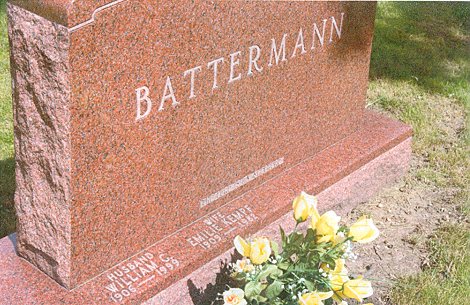 A couple of experiments to consider:

01/03/2005 -- not Wesemann pictures (Shirley Slanker is investigating whose house this was.)

Back of the house

The original porch was on the north side of the house.