A Brief History of the Franzosenbusch Area

Before the Euro-Americans Arrive

The land is buried beneath thousands of feet of glacier.  The glacier moves inch by inch on its patient march to the south.  The soil is scraped and sculpted by the heavy, moving ice.  Change is slow, but it comes.  After a time the sun warms the air and, ever so slowly, the ice melts and the glacier recedes.  An alkaline till is left behind from the grinding and churning of dolomite rock scraped up by the glaciers.

Shortly after the glaciers retreated this is the land of the Woolly Mammoth and the last place on earth where the mastodons roam before their extinction.  The last Mastodon to live on this planet may have been born and died near the area of Wolf Road Prairie.  The rich fertile black soil is built up from the 10,000 years of growth and decay of the grassland plants which move into Chicago area's flattened alkaline landscape after the big ice retreat.

Woodlands grow in other areas with savannas filling the interface between the woods and predominant prairies.  Beavers, wolf, elk, coyote, cougar and other animals follow the rebirth of the plant life.  As does man.

The first humans are the Native Americans.  They find the land rich and desirable.  For thousands of years Native Americans are one with the land.  They recognize the prairie is both their friend and their enemy, but they find a balance.  Natural prairie fires can decimate a village, but if they first carefully burn the area of planned village, and keep it clear of combustibles, the enemy is controlled.  The prairie becomes their friend.

Humans bring more changes to the land.  The “white man” arrives in search of opportunities – freedoms, fur, good farmland and many others.  The first of the Europeans to pass near the area is Robert de LaSalle (René Robert Cavelier, Sieur de La Salle) in late 1679.  While this is not LaSalle’s first or last expedition through the center of North America his passage is a signal of change.  It is the French explorer who names the wide open grasslands of the area prairie, from the French word for meadow.

Trappers of fur find the area a good source for animal pelts as Europeans migrate to the East Coast to find colonies.  More immigrate and, along with the descendents of the earlier settlers, form a nation.  Nations vie for the control of lands in all directions, but here change continues to be slow.

Aaron Parsell is the first “white” settler in 1832 in the south east portion of the area.  A year later Thomas Reed Covelle settles about a mile from Parsell’s homestead.  (Today their old homesteads would lie to the north of 31st Street and east of Mannheim/LaGrange Road.

A few earlier events occurred across the ocean that would impact the area.  Nicholas Torode is born on the French-speaking Channel Island of Guernsey (in France), where he marries and all his children were born, except his son Philander.  In 1819 he moves to the United States, eventually settling in Ohio in 1820.   Nicholas Torode’s left for America so that all of his children might have the right of suffrage, and share alike in the property he possessed upon his death.

That same year classes begin in the home of Heinrich Degener.  There for three days a week Teacher Bartling gave instruction, and after him came "Teacher Hahn.  There were 15 pupils.  In the latter part of 1852, 40 acres of land were purchased for a church and school, and the site now occupied by the fine school building was selected as the place for the first structure. 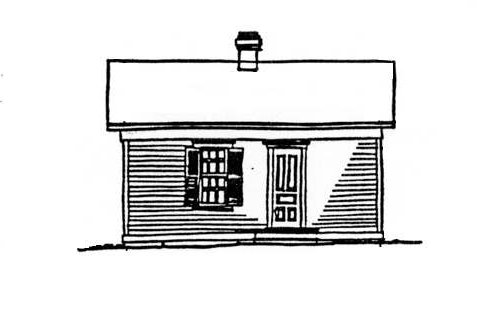 The schoolhouse’s first carpenter is "Father Meyers".  He contributes his time, and others give the building material.  The construction site is on the southeast corner of 22nd Street (Cermak) and Wolf Road.  The building is erected with two rooms, one in which the teacher is to live and the other to serve as the school room.  The construction is completed in the spring of 1853.

One of the early teachers, Mr. Kirchner, has a large family.  The children, when it comes time for bed sleep in a loft in which the feed for the cattle and horses is stored.  The hay serves as a bed and it is said the youngsters enjoy it immensely.  Kirchner, while a good farmer, works the 40 acres of church ground.  However, he is said not to be a good musician and has difficulty leading the choir.

The new school house also serves as a religious home.  Reverend Brauer comes over and once in a while preaches there on Sunday afternoons.  His successor, Reverend Franke, does the same.  In winter Franke gives Bible lessons.  For confirmation the children continue to go to Addison.

Several men in the community (John Schulz, Friedrich Haase, Friedrich Weiss, August Heidorn, Heinrich Ehrenpfot, Heinrich Runge, Siegfried Kolb, Christof Seegers and Christof G. Puscheck) see the need for a church in Franzosenbusch.  In 1857 these men petition the Zion congregation for release, which was granted.  The growing community finds the first schoolhouse too small.  The second schoolhouse is built on the northwest corner of the 40-acrea track and the first minister, the Reverend C. Meyer, is called. On December 18, 1858, he was installed.

In 1901 Mount Carmel Cemetery is established on the northwest corner of Wolf and Roosevelt Roads.  In the winter of 1905-1906 a spur of the Chicago, Aurora and Elgin Railroad is constructed to service the Mount Carmel and Oak Ridge Cemeteries.  This line serves the cemeteries into the 1920s.

The existence of the cemeteries help the area grow.  Flower shops, restaurants, and other business spring up.  In 1905, partially due to that growth, the Village of Hillside is established.

In the 1920s a “Great Proviso Mystery” intrigues that area’s residents.  Some one is buying up most of the Franzosenbusch area east of Wolf Road.  Before long the mystery is solved.  Through various agents and working with several other entrepreneurs and promoters, Samuel Insull is acquiring the land for his “utopian suburb”.  The plan is extensive.  A town center is designed with a theater, library and civil buildings.  Miles of residential streets are graded.  Sidewalks, streetlight, gas lines and power lines are built.  A spur from the Chicago, Aurora and Elgin line is constructed to provide a rail shuttle service that connects to downtown Chicago.

In 1925 the Village of Westchester is incorporated with Otto J. Tatterow as the first village president.

Insull’s plan and Westchester's future are bright and ambitious.  Insull’s and Westchester’s vision may well have succeeded but for one major, unforeseen obstacle – the Great Depression.

With the tight money after the stock market crash of 1929 the Westchester plan grinds almost completely to a halt.  Growth is slow for the 1930s and 1940s.  After World War Two the growth starts to accelerate.  By that time Franzosenbusch exists only in the memories of the descendents of the old settlers and in a few structures.

The Rediscovery of the First Schoolhouse

When developing the 75th anniversary history for the Village of Hillside Ruth Lommatzsch was one of the researchers and co-author of the anniversary book.  Ruth was the one who, during her research, rediscovers the old first Immanuel Lutheran schoolhouse.  At that time the schoolhouse exists as part of a larger structure.  That structure sits on the land which came under development of the construction of the corporate towers which exist now on the south side of Cermak Road (22nd Street) west of Wolf Road.  Podcor donated that house to the Westchester Historical Society (now the Franzosenbusch Heritage Society) on the provision that it is moved from that location.

The house (now called the Franzosenbusch Prairie House) is relocated and eventually placed at its current location on Constitution Drive, west of Wolf Road between 22nd and 31st Street.

The Franzosenbusch Prairie House is under historical renovation at this time.  The current plans are for it to be used as a history and nature museum serving the memories of Franzosenbusch and the beautiful Wolf Road Prairie Nature Preserve.

We welcome any comments, questions and corrections.  In accumulating this information we have found conflicting evidence.  We have endeavored to use the most reliable sources available BUT we can not be sure we have all of the facts completely accurate.  We need your help.  More information from the families of these nine "Founding Fathers" would be of great value to this ongoing project in order to maintain accuracy.  At this time, we are especially interested in photos, journals, letters, etc., which would describe the southeast corner of 22nd Street (Cermak) and Wolf Road in Hillside, prior to the 1860's.  This will help us now, as we work on the restoration.

Please feel free to contact me at j.arbuthnot@sbcglobal.net.  I will route your email through our other researchers.

Sources used for this article include: