Check our Calendar of Events.

Also, from 1 to 4 PM you can drop off Food Pantry items on the Prairie House deck for those in need.

The most visible progress at the Franzosenbusch Prairie House is the creation of the needed parking spaces on the south side of Constitution Drive. Eight regular and one Special Use parking spaces were constructed. Additionally, the water lines to the Prairie House were enlarged in anticipation of renovation and construction work on the House itself - - hopefully to be started this year.

Some of the front garden and garden bricks must be replaced this Spring as well as the restoration of the front garden which was significantly disturbed by the placement of the aforementioned plumbing. (Some of the new plumbing was needed to provide the necessary water flow for the planned fire sprinkler system to be installed during the forthcoming construction.) 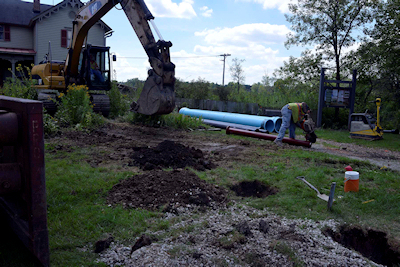 Several school groups were given tours of the Wolf Road Prairie and history of the old schoolhouse contained within the structure of the Franzosenbusch Prairie House.

Photos by Claudia Medina, teacher from the Interculture Montessori School of Oak Park..

Art and Linda's Wildflowers held a sale in front of the Prairie House.  Art Gara reports he had one of the most successful sales days yet. 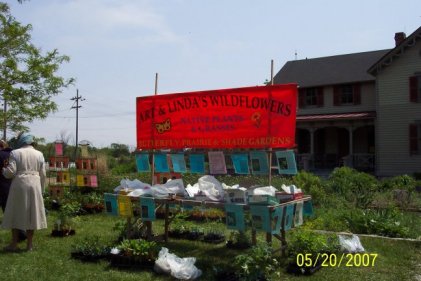 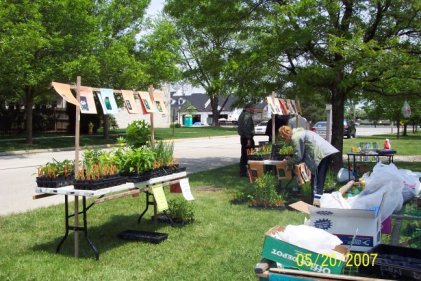 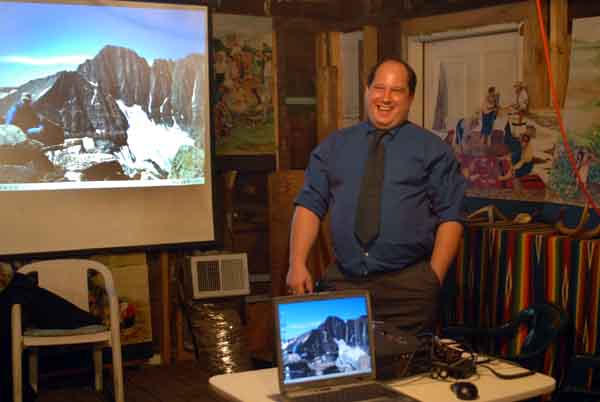 On January 21, 2007, Gregory Keintop gave an informative presentation on “Glaciers and Changing Climates” at the Franzosenbusch Prairie House.

The last Ice Age covered our area of Illinois with glaciers at least a mile high. When the ice receded about 12,000 to 15,000 years ago, our climate gradually transformed to the seasons we take for granted today. A power point presentation and talk  focused on climate conditions past and present and how global warming can affect our future.

Our Society president, John Wagner, portrayed a member of the historic Voyageurs.

Voyageur is French for "traveler".  Starting in the 17th Century the fur trade was a large source of income to Montreal in New France.  Frenchmen and others ventured into the wilderness around the Great Lakes as far south as the Ohio and Mississippi River Valleys in search of beaver and other valuable pelts.  Wampum was exchanged for fur pelts from Native Americans while other Voyageurs trapped furs for themselves.

Many Voyageurs also served as guides and explorers.  Many were employed by the leading trading companies -- the North West Company or the Hudson's Bay Company.

At the Westchester Public Library John Wasik, the author of "Merchant of Power: Samuel Insull, Thomas Edison and the Creation of the Modern Metropolis", gave a presentation on the life of Samuel Insull.  Sam Insull's dream of a suburban utopia led him to develop Westchester.  Working with other entrepreneurs, such as the powerful William Zelosky of Zelosky and Company, the plan may well have succeeded had the Great Depression not rocked the world and driven Insull's companies into bankruptcy.

The weather for The Arts of the Prairie event (sponsored by the Save The Prairie Society) was beautiful.  There was good community interest for both the Prairie House and the Wolf Road Prairie.

was represented.  Items on display included the pelts of a fox and a coyote and the skulls of a deer and a fox.

Jerry Kumery, photos of the prairie

and her friend Karen Stasky, pottery

Mickey Anderson of Sheeping Beauties with her spinning demonstration

Paul Demetrakakes with antique quilt and other quilts

The Save The Prairie Society Table

On May 21 there were two events at the Franzosenbusch Prairie House.  First there was a sale of wildflowers and grasses by Art & Linda's Wildflowers in the parkway in front of the House.

At 2 PM on the deck of the House we had an excellent talk by a Civil War re-enactor.  He discussed life of a Union soldier.  About sixty people were entertained by his knowledge of the hardship and peril.

The events were well attended by over 100 guests.

The Village of Westchester has selected the "Liatris", commonly called the blazing star, as its official flower.  Three species of this wildflower grow naturally on the Wolf Road Prairie to the south of the House:

As Wolf Road Prairie is a nature preserve where you can view the flowers in their native environment.  No picking please.