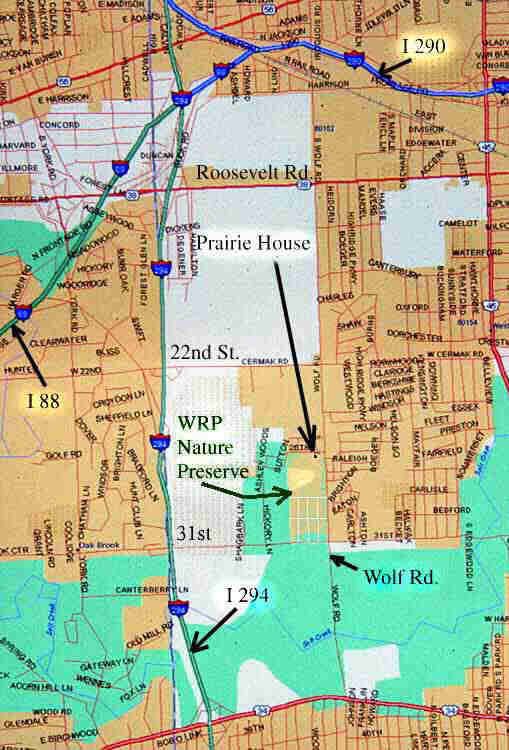 History of Our Group

(The Franzosenbusch Heritage Project has retained all of the records and the wealth of research done by the former Westchester Historical Society and continues its mission to explore and share the history of the Village of Westchester. The Franzosenbusch Heritage Project headed by a special committee, is also dedicated to the history of the greater Westchester "area" and specifically, the German settlers who first formed their pioneer settlement of "Franzosenbusch" at Wolf and 22nd Streets).

The history and evolution of the Westchester Historical Society begins with the story of the Prairie House which is situated at the north end of Wolf Road Prairie Nature Preserve in Westchester, Illinois. This dedicated nature preserve is managed by *Save the Prairie Society (an Illinois nonprofit, formed in 1975), and comprises more than 80 acres. The one acre parcel on Constitution Drive, where the house now sits, is the only land at the preserve not currently owned by a government agency. This lot is owned solely by Save the Prairie Society. (STPS)

In 1985, a separate non-profit organization was established in Westchester for the purpose of saving an old house, which was then located along Wolf Road near 22nd Street. Their mission was to prevent this house, which they believed to be significantly historic, from being demolished during redevelopment for the Westchester Towers. This group called themselves "The Westchester Historical Society" (which itself, grew out of the 1983, "Westchester Historical Commission" ) They were successful in raising about $75, 000.00 and in convincing the development company to give them the house with the proviso that WHS would remove it from the site. In this same year, STPS agreed to allow WHS to move that structure onto its own land at the preserve in order to save it. After a complicated move to the site, where a new foundation was dug and a new roof installed, WHS struggled valiantly for another six years to maintain the "The Stella Nelson House" but was unable to complete the restoration.

In 1991, an alarmed Westchester citizen fearful of losing the building to demolition, formed a special interim committee called "The Committee For the Restoration" He wished to work with WHS, STPS and the Village of Westchester in order to obtain grant money and save the old house, as no other agency wanted the responsibility for the project. The Committee included two STPS members, a Chicago architect and one remaining WHS member who wished to continue the quest. Later that year, what remained of the board of WHS agreed to allow this interim group to take over WHS.  "The Committee For the Restoration" then dissolved and the newly organized WHS, renamed the structure "The Franzosenbusch Prairie House".

In 1994, after several attempts to raise sufficient money without success, an anonymous donor suddenly gave $150, 000.00 to the Westchester Historical Society in order that the house be completely restored. (The donor is now deceased and is known as former Westchester resident, Mrs. Wieck). Then, in 1998, after complicated litigation involving the village of Westchester, the house restoration was finally allowed to go ahead. From 1998 to 2001 the exterior of the building was substantially completed with a "conjectural restoration" to a time period of about 1875. However the interior remains unfinished to this day.

*Save the Prairie Society is an all-volunteer, non profit organization, incorporated in the State of Illinois around 1972. Its stated mission was to prevent the development of land upon which rare native prairie plants were discovered to be growing, west of Wolf Road and North of 31st Streets in Westchester. Eventually, the Society was successful in acquiring individual plots of land and instrumental in having the State and County acquire additional parcels. In 1994 the last unprotected piece of land was purchased by the State of Illinois.

Jim Arbuthnot is a computer programmer, Wolf Road Prairie and Prairie House volunteer, currently residing in Glen Ellyn, Illinois, after living in Hillside for over 20 years. Since the mid 1980's he has been associated with both Save The Prairie Society and the Westchester Historical Society (WHS)  holding various positions including that of Vice President and President of the Westchester Historical Society from 1995 through 2000. In addition he played a key role in the critical investigative demolition of the Prairie House.  In 2001 he worked with several others to start a website -- www.FranzosenbuschHeritageSociety.org -- and is the chief  "Webmeister" working constantly to keep our current site [www.FranzosenbuschHeritageProject.org] updated.

Lana Gits, commercial nature artist, prairie volunteer, tour guide and amateur historian, has been involved with Save the Prairie Society and the FHP for over 16 years and resides in Westchester, IL. She held a Directorship in Save the Prairie Society from 1990 through 1998, and was previously on the "Committee for the Restoration of the Prairie House" in 1991. Immediately following this, she became the Secretary of the Westchester Historical Society and house restoration volunteer, until 1998.  Lana is currently on the Franzosenbusch Heritage Project's Historical Research and Website Committees.  She heads a task group responsible for acquisitions and accessions of items for the Franzosenbusch Schoolhouse Museum.

Larry Godson, photographer, volunteer site steward for Wolf Road Prairie, is a long time resident of Westchester.  He attended High Ridge Grammar School and Proviso West High School and graduated from University of Illinois at Circle Campus with a Bachelor of Science in biology  He has been involved with the Save The Prairie Society since the 1970s.  His interest in the Prairie House was through Valerie Spale, Executive Director of STPS, and a member of the Westchester Historical Commission in the early 1980s.  He has served over the years with the STPS as Vice President, President and Director.  Larry has also served as a Director of the Westchester Historical Society and continues as a member and contributor of the Franzosenbusch Heritage Project.  Presently he also teaches summer nature courses with Jim Hodapp at the Oak Park Conservatory.

James Hodapp is a retired Illinois public high school teacher and a former Peace Corps volunteer who taught at Haile Selassie I University in Addis Ababa, Ethiopia from 1967 to 1969.  For the past 21 years, Jim Hodapp has been a Junoir Naturalist and an Eco-Observation Camp instructor at the Oak Park Consveratory.  Jim is also presently serving as the chair of the Save The Prairie education committee and as a Wolf Road Prairie tour guide.   Jim and many other Save the Prairie Society volunteers have provided Chicago area school and scout groups with free-guided tours of the prairie for over 25 years.

Suzanne Moreau, retired grammar school teacher with a BS in Zoology and former cancer researcher at Michael Reese Hospital brings her own special focus to our group.  In her words, "We have a wonderful piece of history to share with the public especially the children.  Knowing the hardships they [the Franzosenbusch children] went through to attend school is so important for today's generation to be aware of.  We have this opportunity and history in our own community."

Patricia Reaves, born in Hamburg, Germany, came to the United States at eleven years of age. Prior to immigrating to the United States, she lived in Heidelberg and Lyon, France. German is her native language. Her grandfather taught her how to read German script, which is seldom taught in school anymore. Her grandfather introduced her to her family history, which she continues to pursue.  Her interest in history has allowed her to use that interest in her profession as a German, History, and English teacher.  At Riverside / Brookfield High School, where she teaches all levels of German, she has been a sponsor for a German club and a National German Honor Society, Coordinator of the ESL / Bilingual Program for Riverside / Brookfield High School. She has been very busy in several related endeavors including a researcher for the Max Kade Institute for German-American Studies, a part of UW Madison, as well as a presenter to the DuPage County, McHenry County and the North Suburban Genealogical Societies and the publisher of a German Genealogical Primer, which helps people research their German ancestry.

Shirley Slanker, 60 year resident of Westchester, parent of five (Lynn, Robert, Jack, James and Thomas) and grandparent of eight, co-founder and former publisher of the "Westchester News", co-founder with Luella Seida of the Westchester Historical Society (WHS), immediate past Vice President of the WHS and the Franzosenbusch Heritage Society, has been an active member of our community and many organizations.  Working with others she was instrumental in starting this website.  She has supplied more than half of the material for this website.  Among her many activities, Shirley's is also the local genealogist/historian for our society as well as the historian for the Westchester Community Church.  She remains a very active resident, and is concerned with saving and documenting Westchester's heritage.